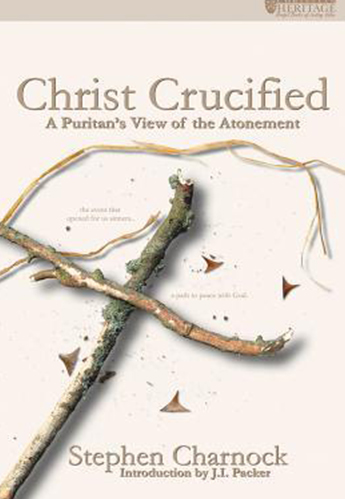 Christ Crucified: A Puritan’s View of the Atonement by Stephen Charnock

In this stimulating work Stephen Charnock links the Old and New Testaments with this classic explanation of how the sacrifice of Jesus Christ fulfils the Old Testament sacrificial system.

He particularly illustrates the importance of the Passover, and opens up our understanding of the differences which characterise the New Testament Church era. He shows that Jesus willingly submitted to the pain he knew he would go through, in order to bring us the blessings of a new covenant with God

The Puritans were brought up on the Bible; for a Puritan mind a clear text from the Bible settled all controversy. It is this discipline and clear sightedness which makes their work so valuable to today’s generation.

Stephen Charnock (1628-1680) was educated at Cambridge University after which he lectured at Oxford University. He was appointed chaplain to the Governor of Ireland, Oliver Cromwell’s son Henry in 1655, where he soon gained a reputation for preaching. In 1675, years after the fall of Oliver Cromwell’s Commonwealth, Charnock became a Presbyterian Minister in London. His works, mostly published posthumously, have the characteristic Puritan concern for central gospel themes and consistent application of Biblical texts to practical problems.