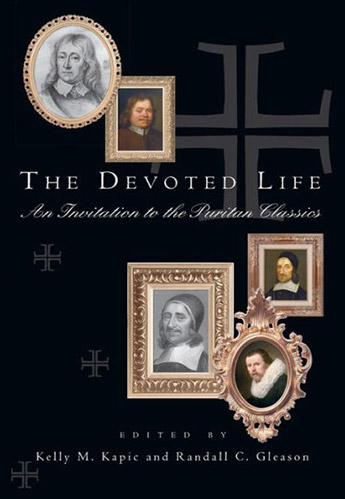 Devoted Life: An Invitation to the Puritan Classics by Kelly Kapic

The Puritans are frequently maligned but seldom understood. Far from the dour malcontents they are often portrayed to be, most Puritans were wholesomely engaged in life.

This book is designed to introduce you to a wide range of influential Puritan writers and a representative work for each that pushes through stereotypes to the heart and soul of these Christian pastors and theologians. With a clear grasp of the historical contexts in which these Puritan works were written, these twenty essays presented by editors Kelly M. Kapic and Randall C. Gleason illuminate the vibrant spirituality of the Puritans that transcend their sometimes surprising political, ecclesiastical and religious differences.

In these pages notable scholars, such as J. I. Packer, John Coffee, Mark Noll, Leland Ryken, Richard Lovelace and Sinclair Ferguson, invite you to sit at the feet of Puritan writers, ranging from William Ames, William Perkins and Richard Sibbes to Thomas Goodwin, John Milton, Richard Baxter, John Bunyan and Jonathan Edwards. What comes through is a living, three-dimensional portrait of the devoted life that emphasizes the Christian experience of communion with God, corporate revival, biblical preaching and the sanctifying working of God’s Holy Spirit.

Randall C. Gleason (Ph.D., Dallas Theological Seminary) is professor of theological studies at the International School of Theology – Asia in Quezon City, Philippines. He is author of John Calvin and John Owen on Mortification: A Comparative Study in Reformed Spirituality (Peter Lang)