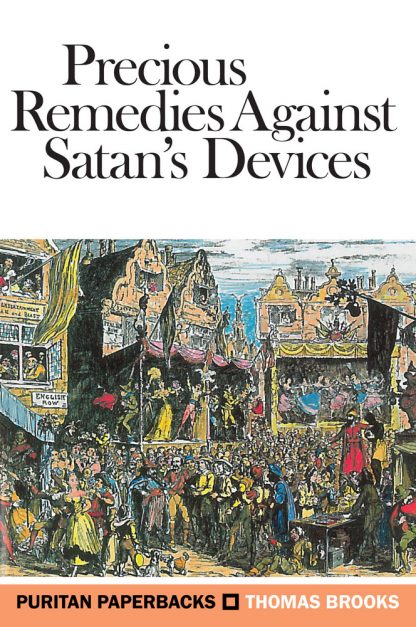 “The strange opposition that I met with from Satan, in the study of the following discourse, hast put an edge upon my spirit, knowing that Satan strives mightily to keep these things from seeing the light that tend eminently to shake and break his kingdom of darkness, and to lift up the kingdom and glory of the Lord Jesus Christ, in the souls and lives of the children of men . . .” This is one of the seven reasons for writing his book which the author gives in his preface.

Among the publishers’ reasons for this reprint is the fact, noted by George Smeaton, that the best Christian authors of former times treated by seductive influence and terrible power of Satan in a way “greatly more full and suggestive than in the literature of the present day.” William Grimshaw, in the eighteenth century, was not the first nor the last to learn this lesson from Brooks’ Precious Remedies and our modern age greatly needs the message which is thrust back into prominence in these pages.

Thomas Brooks (1608-80), entered Emmanuel College, Cambridge in 1625. After a number of years at sea, probably as a chaplain, he was licensed as a preacher of the gospel by 1640. After the Civil War, Brooks became minister at Thomas Apostle’s, London, and was sufficiently well-known to be chosen to preach before the House of Commons on December 26, 1648. In 1662 he fell victim to the notorious Act of Uniformity, but he seems to have remained in his parish and preached as opportunity arose. He married for second time in 1677 or 78, but died only two years later.